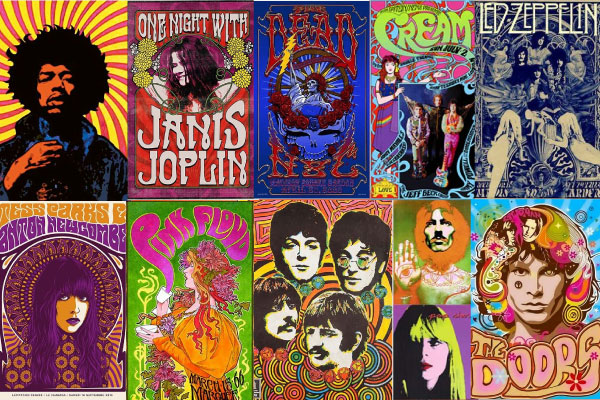 The 1960s and 70s seem to be a completely different era altogether, as far as music is concerned. No other timeline presented such a diverse array of musical experimentation and extensive choices for music buffs as these two decades offered. We can say that the 60s and 70s were not just about the hippie movement but about exploring the musical horizons to their broadest limits. These years were about redefining music again and again. In an era where legendary musicians like The Beatles, Donna Summer, Gloria Gaynor, and Bee Gees took the local and international music scene by storm, who can deny the fact that the 60s and 70s were the most prolific timeline in music history.

These were the times when modern pop music was as much visual as it was audible. Fans went crazy with the fantastic music and loved their favorite artists’ distinct appearances. At the same time, Brian Jones was able to cast an everlasting impact with his endearing musical contributions, and every new single released by Rolling Stones shattered the record set by their previous outing. Let’s pay homage to the artists who made a mark during the 60s and 70s and played an instrumental role in laying the foundation of modern pop music. Check out some of the most iconic photos from the 60s and 70s to relive the times when music was at its finest.

Sex, drugs, and rock ‘n’ roll defined the 1960s. But the decade was also a time of pivotal change — politically, socially, and technologically. Woodstock Music Festival was first held on August 15, 1969. The first-ever festival was organized in a dairy farm located in Bethel, New York. It was intended for about forty thousand attendees, instead nearly half a million people attended this festival. It was a three-day music festival, marketed as an Aquarian

Experience offering three full days of Peace and Music. It used to be a coveted musical extravaganza that became synonymous with the 1960s counterculture movement. Woodstock festival was a hugely successful event, despite that it was hindered by bad weather, last-minute venue changes, and hordes of attendees. It was also criticized for becoming a hub of drugs, sex, and rock and roll. Still, it managed to create waves among the masses, especially music lovers. It remained a peaceful event and earned a place in pop culture history.

It was the brainchild of four young men, namely John Roberts, Joel Rosenman, Artie Kornfeld, and Michael Lang. They all were looking for a profitable and innovative investment opportunity. Given the influential role music played in that era, they considered holding a musical event an incredibly fruitful strategy. Kornfeld was the vice president of Capitol Records. Lang has already organized the Miami Music Festival in 1968, whereas Roberts and Rosenman were New York-based entrepreneurs. The four men came together to form Woodstock Ventures Inc.

This photo was taken on day 2 of the Woodstock festival of 1969 of two of the most powerful female voices in rock and roll history, Janis Joplin and Grace Slick of Jefferson Airplane and Jefferson Starship.

Few bands captured the attention of Martin Scorsese who at the time was a young thirty-seven Indie director and had never directed a music documentary wanted to document The Band’s final performance with an All-Star line-up from Eric Clapton to Bob Dylan. Instead the The Last Waltz wasn’t so much a documentary of each of the members and how together as The Band; the geniuses of Richard Manual, Levon Helms, Rick Danko and Garth Hudson… instead it was a Scorsese man-crush documentary of Robbie Robertson…who’s singing voice was so awful, the tech crew turn off his microphone.

Credited as the BEST music documentary of all times by both music and movie critics, it was nothing but a huge disappointment. The soundtrack is nothing less than phenomenal, from appearance by Muddy Waters, Ringo Starr, Joni Mitchell, Neil Diamond to Neil Young to name some of the greats.. the concert held on Thanksgiving day in 1976 was legendary… the documentary, not so much.

1961: The Beatles with Pete Best and Stuart Sutcliffe

The Beatles have built a legacy in the music industry, which probably seemed unattainable to these boys during this time. However, the person you should focus on in this photo is Stuart Sutcliffe because he was the fifth member of The Beatles. So, the fab four were initially a group of five. But then a tragedy occurred, and this young, highly skilled, and ambitious musical prodigy was taken away too soon.

You may be surprised to know that he started his career as a garbageman and simultaneously attended the Liverpool College of Art. Stuart was a gifted artist who was regarded as one of the best painters in his class. Stuart worked in an abstract expressionist style. While at college, Stuart met John Lennon, a fellow student, and soon became his flat-mate. When one of Stuart’s paintings got sold for a massive £65, which was a huge amount for a beginner painter back then, Lennon convinced him into buying a bass guitar. Stuart didn’t even know how to play it, but Lennon had detected Sutcliffe’s immense talent when it came to music.

Stuart Sutcliffe joined the band with Paul McCartney and George Harrison. When he joined the band, they were yet to decide its name. Sutcliffe and Lennon tried many different names, from Beetles to Silver Beetles, and then the Silver Beatles. Finally, they all decided to keep it simple- The Beatles.

Sutcliffe, the Beatle’s drummer Pete Best, and other band members traveled to Hamburg in Germany, and there Stuart fell in love with Astrid Kirchherr. The two got engaged after two months. Kirchherr gave Stuart Sutcliffe the iconic mop-top haircut, which later became the identity of the entire band. In 1961, Stuart left The Beatles to focus on his artwork and life with Astrid. He even won a postgraduate scholarship at the Hamburg College of Art to study under renowned sculptor Eduardo Paolozzi. But, unfortunately, he died unexpectedly due to cerebral hemorrhage in 1962, when he was just 21.