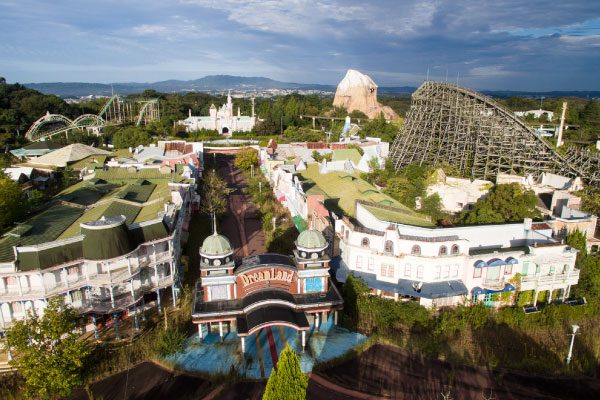 Whenever we hear the word amusement park, we think of swings, merry-go-rounds, Ferris Wheel, and loads of fun-filled activities. But, the following amusement parks are anything but fun. These parks used to be an inviting place for the entire family but due to an unfortunate incident they had to be closed and completely abandoned. Now these parks are a sight of dismay and despair. Let’s have a look at the eleven spookiest amusement parks around the world.

If you want to know how a horror movie’s set would look like, visit the Geoje Island in South Korea where the Okpo Land Park is located. The duck-themed roller coaster pictured here used to be its main attraction but several unfortunate incidents generated the perception that it was haunted. Back in the late 1990s, this ride claimed one life, but the owner continued its operation unapologetically. Again in 1999, a young girl fell and died tragically. The owner shut down the park and disappeared. Rumor has it that the park got demolished in 2011 and there are plans to build a hotel in its place.

Located in Fort Mill, South Carolina, this Christian theme park was more like a vacation destination as it was a residential complex-cum-water park. Owned jointly by Jim Bakker, the noted PTL televangelist, and his then wife the late Tammy F. Bakker Messner, the park remained a financially rewarding business for the couple as they earned nearly $126 million annually. Built by the famous church builder Roe Messner, the park occupied a massive 2,300 acres, and remained operational between 1978 and 89. However, everything went downhill when Jim’s affair with Jessica Hahn got revealed and he was accused of fraud. The park’s tax exemption status was also revoked by the IRS and to make things worse it was hit by the Hurricane Hugo in September 1989. It got severely damaged and was closed. Some portions of the park have been sold and the rest is under redevelopment.

The Six Flags used to be a very popular amusement park before 2005, which is when the notorious Hurricane Katrina hit it and the property got seriously damaged. Ironically, the park was operational for just half a decade from its inaugural in 2000 as it had to be closed following the devastating Hurricane Katrina that took thousands of lives and displaced countless families. The park’s entrance still displays the sign Closed for the Storm, which adds to the creepiness of site. It has benefitted filmmakers though as some portions of movies like Jurassic World were shot there.

If there is one abandoned park that has remained the eye candy of photographers around the world, it is Nara Dreamland. Since its opening in the 1960s, this park remained very popular among the masses until the late 1990s. From 2000 onwards the number of visitors started decreasing eventually leading to its closure in 2006. Interestingly, California’s Disneyland was the real inspiration behind this park as it also boasted of very colorful, fairytale like rollercoasters and rides. Sadly, it is now in a dismal shape and everything is rotting because of years of neglect and abandonment.

It is the first ever waterpark constructed in the very famous Walt Disney World resort complex. It was enjoying a good run and attracted large number of visitors until November 2001. The park had to bear the brunt of the negative consequences of 9/11 terror attacks in New York. Since then, it hasn’t been restored and is left to rot. It is one of the two parks built by Walt Disney World that got abandoned.