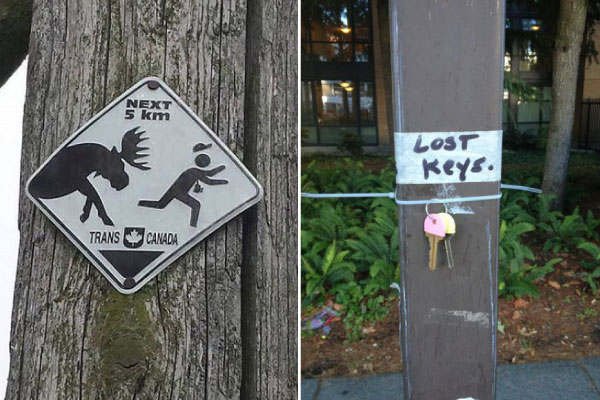 There is so much to enjoy in Canada than maple syrup… and more maple syrup. Apart from having one of the most handsome Prime Ministers in the world, and utterly hospitable public, Canada is home to some of the most unconventional norms and rules. Canadians are principled nation and never turn your back ever… no matter what are the circumstance. At least that’s the idea we get from these thirty pictures from Canada.

Meanwhile, Canada is living in the future

“‘If you’re in a public washroom and you think someone’s gender does not match the sign on the door, follow these steps:

1. Don’t worry about it. They know where they belong.”

Canada is one of the first countries to accept the people belonging to the LGBTQ+ spectrum and their rights. This picture perfectly showcases the loving and warm nature of Canadian people humorously. How we wish the rest of the world weren’t so full of hate and bigotry. This sign might create a lot of confusion as straight men who don’t belong in the women’s washroom, and know that, are still always found there.

What to expect when you visit Northern Canada

The hotel owners have learned from their mistakes in this situation. It’s quite hilarious to think at some point a bear attacked the hotel. We’re pretty sure the owners couldn’t “bear” it anymore and had to put up this sign. We are dying to know what happened and might just take a trip down there to find out the details. However, we are still confused that was the bear someone’s pet or did it just come out of the wild.