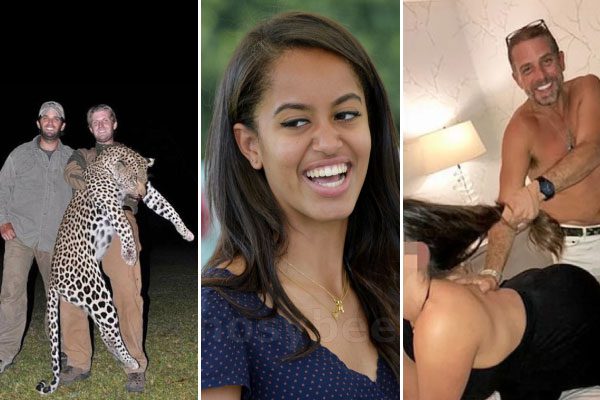 No matter which history book you go through, there will be stories about some very scandalous and mischievous First Children who got their families into trouble. The children of American presidents have been involved in many controversies for centuries. However, let’s not ignore the fact that most of the ‘shocking details’ of their antics were blown out of proportion.

We couldn’t help but sympathize with the First Kids as they are so heavily and intensely scrutinized that most of them indulge in weird activities only out of frustration. Presidential clans are constantly under pressure, and usually, it gets to their children who end up paying the price of constant monitoring. So, today, we will introduce fifteen of the most scandalous and controversy-mongering First Kids. But, don’t think that any of them were bad people. They were just the victims of their circumstances. So, let’s get started.

Believe it or not, Hunter Biden, current US president Joe Biden’s son, had an affair with his sister-in-law-Hallie Biden. The two dated for several years after Hallie’s husband, Beau, died in 2015. At that time, Hunter had separated from his ex-wife Kathleen, and the latter had filed for a divorce. According to Hunter, the two got romantically linked in Los Angeles while he was “recovering from a weeklong crack binge,” and their relationship grew stronger during a trip to the Hamptons.

Hunter Biden also got dishonorably discharge from the U.S. Navy Reserve for testing positive for cocaine. He then went on to impregnant a stripper and tried to denied it until he was forced to take a paternity test. And then there’s the famous “laptop” that he forgot at the repair shop; bribes deals from Ukraine and China that allocated a 20% cut for “the big guy” and let’s not forget about all the photos of Hunter smoking crack with hookers. No wonder the media buried this “laptop” news weeks before the 2020 election.

Historians have a strong consensus that Alice Roosevelt, the daughter of US president Theodore Roosevelt, was the wildest First Kid they have ever seen or heard about. Her father once even said that it was too difficult for him to run a country and take care of Alice simultaneously.

“I can run the country or attend to Alice. I cannot possibly do both,” the president had remarked, hinting at how difficult it was to handle Alice’s mischiefs. When women fought for equal rights and voting rights, Alice Roosevelt was involved in anti-social activities such as gambling, playing with guns, and chewing gum in public gatherings. She regularly went about town holding her pet snake. She partied a lot but was also concerned about politics. Reportedly, she burned a voodoo doll in the White House to welcome First Lady Nelly Taft.

John Payne Todd was the stepson of James Madison, the fourth president of the USA, and Dolley Madison, from her first marriage to John Todd, Jr. Dolley brought him along after marrying James Madison, who did not have any biological children of his own. Though he generally had a positive reputation, John’s activities were far more repulsive than any First Kid. It is reported that John was continually a reason of embarrassment for his family.

His parents, the then-president and First Lady of the USA, repeatedly tried to send him to school or help him get vocational training, but he just didn’t pay heed and couldn’t study or work for long. Payne was an alcoholic, addicted to gamble, a womanizer who would go missing for months on end, usually ending up in debtor’s prison to which James Madison paid over $40,000 (over $1 million in today’s currency) to debtor’s prison. He continued to spend money, due to which his family’s financial position deteriorated and the Madisons had to spend their retirement in poverty. After James died, his widow Dolley had to sell some of his papers to Congress to prevent bankruptcy. The payment was delivered to Dolley as an annuity so that her son couldn’t waste his mother’s money. Talk about a blood sucking stepson.

The son of President James Garfield, Irvin McDowell Garfield, wasn’t too rambunctious and was like any average child. However, some of his notorious escapades caused concerns for the president.  Young Irvin was found riding his bicycle down the steps of the White House on multiple occasions. For an average kid or parent, this may appear to be a usual thing. However, for First Kids and White House residents, this was a strict no-no.

Irvin was the son of the twentieth President of the US. His dad, sadly, got assassinated in 1881, when Irvin was barely eleven years old. Irvin grew into a very responsible young man; he studied law and lived a long and prosperous life. Irvin Garfield died at the Peter Bent Brigham Hospital when he was 80.

Abraham Lincoln is perhaps one of the few presidents in the history of the USA who are still remembered for their services to the nation. The grace, charm, and presidential demeanor of Ab Lincoln are second to none. But, sources claim that when Ab was young, he was pretty wild. Maybe his kids got this wild lifestyle from him, or it could be in their genetics. No matter what’s the reason is, it is a fact that Ab’s kids were big-time troublemakers.

His youngest sons, Tad and William, were quite infamous in Washington as the duo regularly pulled pranks on White House guests. Unfortunately, William died at a young age, and Tad had to lead on the legacy, so he kept making mischief. In one of his many memorable stunts, Tad organized a yard sale out of the White House where he tried to sell his parents’ clothing, and another time, he tied goats to a sled and forced them to pull him through an official reception. It was Tad who started the tradition of pardoning a turkey on Thanksgiving every year.