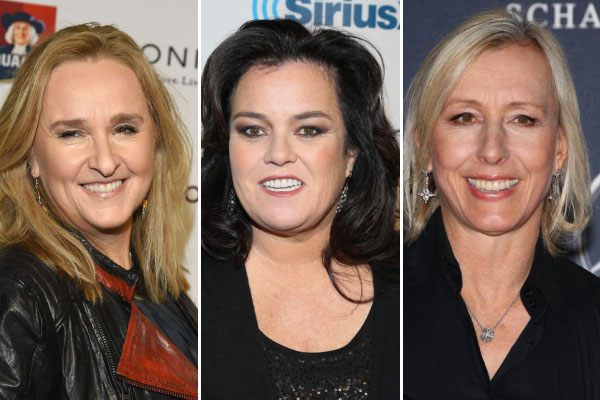 Marriage between same-sex couples has the same dynamics as straight couples. However, filing for divorce is substantially more difficult for gay couples than straight couples. There is the aspect of custody decisions that are highly complicated because there are no set laws that work around same-sex parents. Many gay or lesbian couples reside in states that still have not legalized gay marriage; hence filing for divorce is a huge issue. Laws get amended all the time without realizing how they might affect same-sex couples going through a divorce. Moreover, there is always the constant interference of the media when it comes to celebrity same-sex couples.

Why Celebrity Divorces are so Heartbreaking? A celebrity’s personal life becomes a spectacle for everyone to see and enjoy. So when a couple goes through a divorce, may it be straight or gay, the separation is displayed publicly in the most inconsiderate ways. That’s completely wrong approach if we think from the celebrity’s perspective.

Do Celebrities Enjoy the Fame that Divorce Brings to them? The answer is that most of them don’t but some do enjoy it! Many celebrities like the attention and fame their divorce brings them. Hence, they elongate the divorce processes, custody battles, and court visits. They take it to the point that the divorce becomes exceptionally sour. On the other hand, some gay couples manage to end their marriages in the most peaceful ways, with dignity and class. So, let’s check out some of the most heartbreaking gay celebrity breakups.

Elliot (Ellen at the time) Page met Emma Portner, a dancer and choreographer in New York City for the Broadway Dance Center on Instagram back in 2017 and within six months of ‘dating,’ the two decided to tie the knot. They got married in that same year (2017) and by January 2021, they filed for divorce…and approximately two months later, Ellen Page who came out as gay in 2014 announced that she is now he, Elliot Page is a transgender male.

January 2018: “Can’t believe I get to call this extraordinary woman my wife”

January 2021: “After much thought and careful consideration, we have made the difficult decision to divorce following our separation last summer. We have the utmost respect for each other and remain close friends.”

It is speculated that the reason for their divorce may have to do with Ellen’s decision to become Elliot. Marriage is difficult in any relationship and especially so when one spouse is going through a gender transistion.

Sara Gilbert and Linda Perry, two huge names of the entertainment industry, ended their marriage of six years after being separated since August 13. They had dated each other for three years before getting married in 2014. Sara, an actress, and a producer had two kids from her previous marriage, which then became a part of Linda’s life. Linda has produced songs for major artists like Christina Aguilera and Pink while Sara has worked on the hit series Rosanne , The Conners and hosted The Talk. It was revealed by People magazine that the marriage ended on the grounds of unfixable issues officially in 2019. Sara Gilbert also asked for an exemption from spousal support from both sides in the divorce documents.

After thirteen years in total and two years of marriage for Cheyenne Jackson, the talented actor from TV series ‘Glee,’ decided to end his marital journey with physicist Monte Lapka. They had an extravagant wedding ceremony, which was all over the news. Cheyenne, the America actor singer left his husband for another man and literally moved to another city. A statement was also released later by Jackson’s manager that the split was not hostile. Cheyenne Jackson then got engaged to Jason Landau and the two married in 2014.

This couple officially divorced in 2012, after two years of fighting in court. The couple married in 2003 and filed for divorce in 2010. This singer and actress duo were married for nine years and had two kids during their time spent together. Since their divorce, Etheredge and Michaels have been disputing in court over the children’s custody and visitation rights of Johnny and Miller. Due to the nature of Etheredge’s career, she was always on tour, and Michaels took advantage of that in court and asked for more child support money ($10,000) plus spousal support ($13,000) that was already a whopping $23K and 50% of royalties from Melissa’s album, The Awakening. This was one of the most bitter divorces in celebrity history.celev

Another hostile divorce happened between the elite wedding designer and his spouse Ryan Jurica who said their vows in 2003. Family therapy and couples counseling were of no use as Tutera was highly addicted to sex and would indulge in prostitution, Jurica made this statement to Peoples magazine. This statement was not taken well by Tutera, who said he would file a case for slander. Their twins were split up and given to a father each as both the parents were birth fathers to a separate twin. Tutera later expressed that terms between his ex husband and him have been so bad that he’s unable to spend any time with his other twin child.

Rosie decided to get married again in 2012 after she met Michelle Rounds. Later, things did not work out between them, even with an adopted a 4-year old daughter, name Dakota, so they decided to end the marriage in 2015. Michelle Rounds ended her life that same year (2015) at the age of 46 years old..

Rosie O’Donnell and Keli Carpenter’s marriage hit a dead end after just three years. They got married to each other in 2004. Their wedding was a form of supporting gay marriage after it was legalized by the mayor two weeks before. It was a problem-free divorce finalized in 2007. They had four kids with each other and have now moved on with their lives romantically.

This couple’s parting was unfortunate as they were looked up by many gay individuals as idols and advocates for same sex marriage. Their relationship and struggle to get married lasted 18 years before the government legalized gay marriage in 2008. That same year (2008) they got married in Los Angeles, California. No less that four years later, they filed for divorce in 2012.

We were in a relationship for almost 18 years and before that we were friends for 20 years. So this isn’t some sort of Kim Kardashian thing.

People say to me, “You were like the poster women for gay marriage”. Well, Rosa Parks was the poster child for riding on a bus, but she didn’t spend the rest of her life riding buses.

Sadly, in 2019, Dianae Olson died from a brain cancer at the age of sixty-five in her home in North Hills, California.

Actress Jane lynch married psychologist Lara Embry in 2010 after meeting her at a charity event in San Francisco. They had a three-year marriage and were among the first celebrity gay couples who had the privilege to get married officially. By 2013, the two filed for divorce and it was made official in 2014. As there was not a prenuptial agreement, there were plans on taking the matter to court; however, Jane softened up, whereas Embry asked the court for alimony of $94k per month, which was denied by the court. Lynch once stated in a live interview with Larry King that her ex wife and she are on good terms.

This couple was never married, but they wore infinity rings on their fingers and were together for close to fifteen years. They split up in 2011 and had two kids where Foster was the one who gave birth, and Cydney adopted them. The two women are still friends to this day.

Ricky Martin, the “King of Latin pop,” discussed his breakup on The Ellen DeGeneres show. Carlos Gonzalez Abella had been his beau and rock in tough times for years. They had been involved romantically for more than five years, and Abella was like a stepfather to Martin’s kids. Martin had Abella by his side when he announced he was gay to the world. It was confirmed by People magazine in January that the couple has officially called it quits.

This couple spent three years together in love after having a bad breakup in 2000, with the medial covering non-stop. They never made it public if they were married or not, but they did wear wedding bands similar to each other. They were named and famed for being a world-known lesbian couple. However, this happiness was not long-lasting, and after their breakup, Heche suffered mentally with her sexual identity before going back to dating men.

This couple held together with a relationship for six years despite the forty-one year age difference. David Geffen, the music and media tycoon has a net worth of $9.9 billion. David and Jeremy had a great run ever since Lingvalls college graduation party from University California, Santa Barbara, where they met in 2006, up until the end of their relationship in 2012. Though they never officially married, we are sure that David gave Jeremy a ‘parting’ gift when the two lovebirds went their separate ways. They even once attended a state dinner under the Obama administration at the White House together welcoming the Prime Minister of India. The breakup was made public by Lingvall in his interview with the New York Post, and he declared that the parting was mutual….”the relationship had ran its course.”

Martina Navratilova had an extremely bitter breakup with her former partner Toni Layton. Layton claimed that Martina broke up with her without warning and even locked her out of their home. In turn, she filed a case against Martina and threatened to let the cat out of the bag regarding Martina’s secrets. However, after two years, the situation reached an amicable agreement, as stated by Layotns’s lawyer to Page Six. Layton used Martina’s secrets and fragile reputation as revenge for the breakup. Layton fought over many properties, collection of frog art, and some automobiles.

This star tennis player who has won many championships didn’t have the same luck in her love life as she had in tennis. She split up with her partner Judy Nelson after a relationship of eight years. They were never married; hence, Judy filed a palimony case, causing Navratilova to pay $3.5 million to Judy. Judy won the case because of a document both signed in 1986, citing that their assets and income would be shared. Judy Nelson’s books Love Match were inspired by Martina, who moved on to marry Julia Lemigova in 2014.