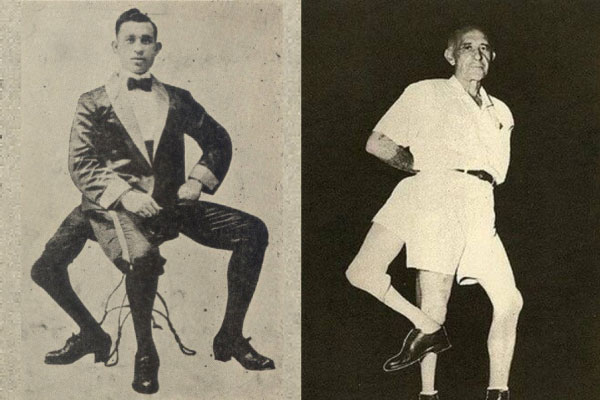 “Freak” is a term used to describe people who are suffering from an extraordinary disease or who are physically deformed, either by a genetic mutation or self inflicted. It can also be used genetic alteration in animals and plants. Freaks can be grouped in two. The natural freaks and those who are self made freak. The natural freaks are those who that suffers from a genetic disorder while the made freaks are those that had surgical alterations done to their bodies.

We have gathered some of the most genetically challenged persons who have ever lived and a few of those who some may say they are mentally challenged to do what they did to themselves.

Grace McDaniels was born in the year 1889 with a genetic disorder that made her have elephantiasis of the lips. Even tho the media labelled her “mule face woman” she refused to let it get to her and embraced the way she was rather that living a life of depression. Aside that, she also made some money from it by traveling with the sides show. Eventually she had a son that had no deformities whom she saw as her life and happiness. When he was old enough, he helped her with her career. After she had joined Harry’s Lewiston circus, she began earning $175 weekly.

In 1895, Robert “Pony Boy” Huddleston was born. People referred to him as “Pony Boy” because he walked on all fours like a pony, and people thought he was unhealthy and in pain. For about 35 years, Robert traveled with the sideshow and never had any issue with his appearance and the way he walked. Robert died in 1970.

Laloo Ramparsad was lived from 1874-1905. He was born with a parasitic twin that was attached to his torso that had 2 working arms, 2 working legs, a torso and even a functioning penis… the only missing body part was the head. Laloo was known as the “Happy Healthy Hindu” was from a small village in India Oovonin, Oudh. In 1881 at just seven years old, an Englishman discovered him and brought him to England and later to the rest of Europe to be part of “the freak show.” In 1891, he came to the United States and worked for Barnum and Baileys as well as Ringling Brothers. Sadly when he was on tour with the Norris and Rowe circus in Mexico, he was killed by a train accident in 1905.

The two-headed Mexican man who became a sensation when he was discovered by a freak sideshow promoter who realized that he can showcase Pasqual Piñón as the man with 2 heads. The fact of the matter was that Pascal who was born in 1889 and died in 1929 at the age of only 50 years old had a cyst or perhaps a tumor that was so large on his head that it made him look like it was a 2nd head.

In the early 1900s, Pascal became a performer with the Sells-Floto Circus and toured the entire United States. The freak sideshow promoter had a wax face painted onto the tumor that was on top of Pasqual’s head so that it would appear that he had a second head. Ater touring for several years, the manager of the circus took pity on Pasqual and paid to have the tumor/cyst removed from his head and Pasqual settled in state of Texas where he lived the rest of his life.

She went through surgery to have a third breast, which means it was there originally. But if you want to believe that’s it’s real, then you can wait till the time mutants would begin to exist.