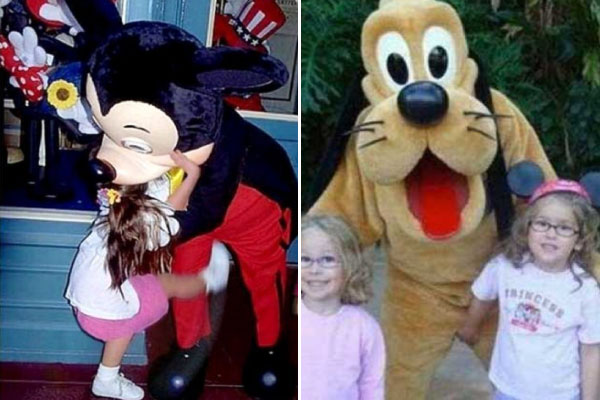 Disneyland and Disney Parks are indeed one of the most amazing places to visit in the world, after all it is the “happiest place on earth.” Every year, these parks are filled with thousands of visitors from all over the world who have come to enjoy—and make memories with their family and friends. However, sometimes these parks have become even more interesting when people are found doing strange acts which are funny and worth watching.

You might be interested in seeing those weird scenes—that being said, we are here to help you give you something that would generate a spontaneous burst of laughter, and would make you giggle. Let’s find out some of the Weird Scenes Captured by Cameras in Disney Parks around the world.

One of our own!

Well I can’t actually guess what the Donald Duck is saying to these little ducks passing along the road, but I am pretty sure his fixed smile is either making them run away or—maybe, just maybe—he is trying to befriend them.

You think I am enjoying this?

Well amusement places like Disney Parks are usually meant for people to have some fun and enjoyment but this woman doesn’t want to go with this idea. It feels like she was ditched by her spouse, and now she is clearly pissed.

Her upright face full of angst which she is maintaining even in a joyful ride shows the extent of calamity her husband’s going to bear. We pray that he survives.

You are never old

The notion is quite untrue that the amusement parks are only and solely meant for kids. This picture is proof that adults can also have quality time. The cool dad is giving all what he has to the moment and enjoying acting like this. Surely this act may be embarrassing for his kids, but his wide-open smile is a testament that he doesn’t give a damn about it and the only thing he cares about is having fun.

Minnie, I am Going for a walk 😉

Minnie Mouse may be the heartthrob of Mickey, but it doesn’t mean that he can’t have fun with others. He usually strolls in the park among other people and sometimes joins them too in their rides. What will you do if he sits along you and passes you a smile? Of course, you will pass a smile back! But, these guys are missing the golden opportunity of having him.

Visiting Disneyland and meeting Disney characters are the dreams of every child and refusing them on these two may not go well for the parents. But this little girl is behaving on the contrary: She had the golden opportunity to meet with sleeping beauty . . . and he is clearly not delighted.! Perhaps not in mood, or she doesn’t like this character.