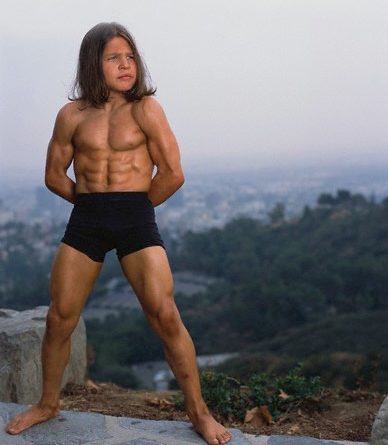 Do you remember Little Hercules? Today, we all know him only as Richard Sandrak, but there was a time when he took the world by storm due to his incredible physique. Despite his young age, Sandrak showed impressive muscles and astonished the world. After all, there’s a reason why he was dubbed the Little Hercules.

The world is full of talented, remarkable children. Kids like Daliyah Marie Arana had read over 1,000 books even before turning five years old. And, how can we overlook the ten-year-old Addisyn Doss, who took the saying giving back to the community a bit too seriously and came up with the innovative strategy of Snuggle Sacks to help the homeless. Doss used to fill those sacks with blankets, food, clothes, and toiletries and distribute them among the needy. But Richard Sandrak belongs to a whole different league of remarkable kids. His unbelievably strong physical self got him the nickname, Little Hercules. Today we look at the life of Richard Sandrak at length.

So many adult males and females made headlines in their respective regions for achieving impressive bodies. They could achieve this through practicing self-control, dedication, and determination for years and years. A few of such people are Arnold Schwarzenegger, Terry Crews, and of course, Hulk Hogan.

Their claim to fame is their remarkably toned, muscled bodies. Their muscular physique impressed everyone. But, let’s not forget that they all are adults and had enough time to invest in their bodies. Their muscular bodies are a result of years of hard work. So, it is exceptional and surprising when a child starts gaining strength and muscle and gets a physique that could shame all these noteworthy strong men of our age. Richard Sandrak is that child.

Around twenty years ago, the world was introduced to Richard Sandrak because of his insanely strong, muscled, and chiseled body. People were taken aback because he could achieve such a toned look at the age of eight only. The only image that came to people’s minds when they saw Sandrak was Hercules, and that’s why the child was named Little Hercules.

Within a few months of his first appearance, Little Hercules had become the face of media. He was literally all over the place. He appeared on national television, gave interviews to news outlets, and was featured on magazine covers. Whatever publicity stunt you can think of was tried on the little kid. All of this because he had a fantastic physique. He was roped in three movies, and in one of them, he shared screen space with none other than the mighty Hulk Hogan. But, after some time, Little Hercules virtually vanished, and we had no idea where he had gone and what he’s been up to.

Richard Sandrak was born in 1992 in Ukraine. Before we dig out his whereabouts nowadays and find out how life shaped him, it is essential to get to know him more and understand how we could build such an incredible body. He was interested in fitness and exercise from an early age, maybe because his parents themselves led an active and energetic life. They used to work out and train at home, which is how Richard also developed an interest in bodybuilding from an early age.

Richard’s mother, Lena Sandrak, and father, Pavel, were pros in their fields. Lena was a professional acrobat, and Pavel was a world-famous martial arts practitioner. Given this scenario, it becomes apparent why young Richard was into health and fitness so much. Watching his parents work out together inspired him to push his own limits. He was inspired to build his body and started training using his parents’ equipment and following their exercise regimes.

Richard’s parents probably had never thought that their young son would take fitness and a healthy lifestyle to a whole new level. While other kids his age were busy being goofy and carefree, Richard focused on a unique goal- to become a bodybuilder. Richard’s parents initially thought he had unique goals, but later they realized that their child was exceptionally gifted.

So, when Lena and Pavel realized the true potential of their son, they decided to help him reach his goals. They moved to Pennsylvania, the USA, from Ukraine and returned to the same active lifestyle they were used to. But, the difference was that now Pavel took Richard along on his training sessions. He taught him workout techniques and ethics. He also instilled an interest in Taekwondo in Richard, as Pavel was a pro at martial arts.

Pavel Sandrak quickly realized that his son Richard was highly talented and a quick learner. He responded really well to martial arts, which not every kid can display. Pavel was confident that with the amount of balance and control Richard had shown initially, he would not need lengthy training sessions to become a trained martial artist. Richard had shown tremendous mental and physical resolve.

For Pavel, Richard was the ideal student as he quickly picked up on every minor and major technique of Taekwondo. Pavel was pleasantly surprised and decided to allow Richard to reach his maximum potential. So, he introduced his son to weight training. Slowly, stretches became a part of Richard’s routine exercise regime. Pavel couldn’t believe how quickly Richard was building muscle mass and adding resistance. This forced Pavel Sandrak to make another important decision.