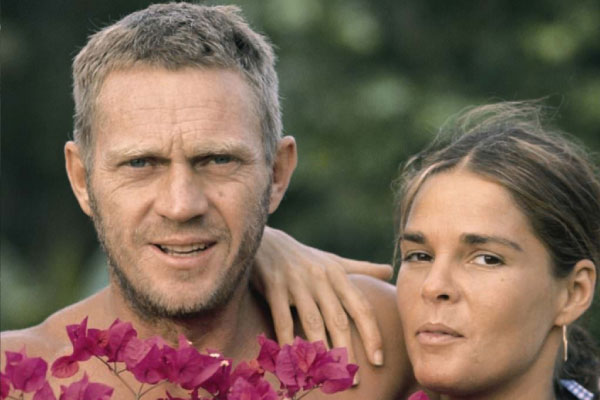 Let’s take a moment and think that it is 1970’s all over again. You are strolling down the streets in London, or maybe Venice, or Florence, and you see some well-known celebrity there in nothing but a short and a vest, roller-skating or sunbathing topless at some nice beach. This is because they were actually taking a break from work and just living their lives while still being followed by the paparazzi. That’s the price of fame for these actors and actresses

When you have attained stardom, is it even possible to have any kind of privacy? The answer is no. Back in the 1970s, only the press and paparazzi would follow these celebrities. Today, with everyone readily able to snap a photo, life would have been much different for these 1970s icons. Have a look at these photos and notice yourself how their eyes talk about the delight of a nice vacation with a glint of devilishness!

Sylvestor and his best bud

Already grabbing a tissue? Wait, because it gets even sweeter. 1971 was a tough year for Stallone and his doggie. We were both, thin, hungry, and living in a flophouse above a subway stop, I used to say this apartment had… Hot and cold running roaches.”

“When I was 26, totally broke, going nowhere VERY fast, owned two pair of pants that barely fit, shoes that had holes in them and dreams of being successful were as far away as the sun… But I had my dog, BUTKUS, my best friend, my confidant, who always laughed at my jokes, and put up with my moods, and was the one living thing that loved me for who I was!”

“When things got even worse I had to sell him for $40 in front of a 7-Eleven store, because I couldn’t afford food, then like a modern day miracle, the screenplay for Rocky sold, and I could buy him back, but the new owner knew I was desperate, and charged me $15,000 … He was worth every penny!”

Hugh Hefner and Barbi Benton are clicked in coastal Miami for this iconic photograph. A dashing Hugh Hefner is holding his freshly hunted prey while Barbi is standing beside him, proud of her beau. Barbi and Hugh Hefner dated for almost seven years when she was just twenty-four years old. When Hugh asked her out on a date, she said that she had never dated anyone older than twenty-four, to which he replied, “neither have I.”

She appeared on four Playboy magazine covers but was never a Playmate of the month. She was at the time of her prime, one of the most iconic beauties and the face of the 1970s

Leonard Nimoy and his family

This Leonard Nimoy and wife, Sandi and their two kids, including his mother doing the Vulgan salute in 1970. Leonard Nimoy play Spock in the Star Trek franchise for nearly fifty years. Star Trek debut in 1964 and has been a science fiction hit series with multiple spin off shows and movies since it first launch. Here we see a softer side of Spock (at home with his family) just keeping it cool

Only Bill Gates, who became one of the richest men on earth, can smile as cheekily as he gets his mug shot taken. However, when this photo was taken, Bill Gates was a nobody… he was not a famous entrepreneur at the time, and maybe his playful and risk-taking nature made him the man he is today

What a remarkable coincidence! Who knew that the esteemed photographer Daniel Sorine would capture the comedy genius, Robin Williams, before the prime of his life, working as a mime in New York’s Central Park? This photo was taken in 1974… at the moment when Robin Williams was discovered.