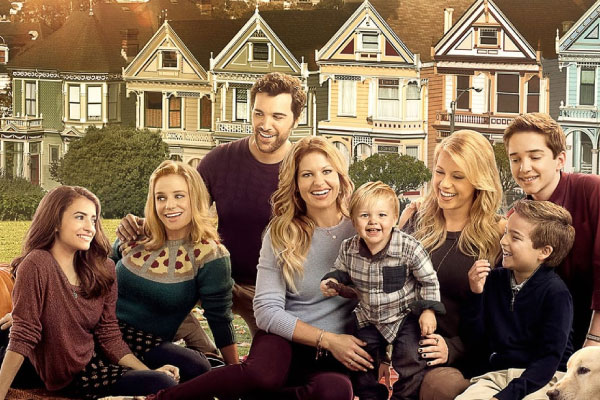 The 1980s and 90s were simpler times; viewers found happiness even in the most rudimentary and mundane storylines and waited eagerly for the TGIF lineup of shows. Family-based sitcoms were the most popular, and neatly packed life lessons were the primary focus of production houses. With shows like Full House, which rules the primetime slot for as long as eight years, the everyday situations were pleasantly portrayed.

We are sure many of you grew up with Tanner and co and still might miss the three daddies. Some time back, Netflix released a reboot of Full House, perhaps to cash in on the hit TV sitcom in the 80s. Aptly titled Fuller House, the show boasts stark similarities with the original series and focuses on the life events of Stephanie Tanner and Kimmy Gibbler. However, we couldn’t help but notice 22 eerie parallels between the two shows. From a lazy style of writing to unreal set and many other things, here are the pointless similarities between Full House and Fuller House…. and some dark secrets few know about.

The Tanner House is anything but average. Forget about the chaos that is a part of everyday life in the Tanner household; even the staircases are pretty weird. Did you notice that there’s one staircase in the kitchen and another in the living room, both leading to the upstairs hallway? Believe it or not, but in the Tanner House, two staircases will take you to the same hall, right outside the kids’ bedrooms.

Maybe this is some kind of a portal that we are unable to understand, or else, the camera is continuously placed on the other mysterious stairway. Then again it could be designed this way on Bob Saget’s request as he’s known to be incredible vulgar with kinky behaviors. This proves that Bob Saget is a pretty good actor because he is the polar opposite of the squeaky clean Danny Tanner.

Why on Earth would Steph Give Up Everything for DJ?

We couldn’t believe it when Stephanie gave up her successful career for her sister and quit DJ-ing altogether. Maybe she loved her a lot. Couldn’t she prefer to do a bit of traveling to support her sister and not give up everything for her? Steph’s life revolves around her sister is another unconvincing aspect of an already heavily DJ-centric plot, and we cannot digest it at all.

Few know that Jodie Sweetin was a meth addict for many years. After the original show ended, Jodie was 13 years old and had no job to go to. So drugs such as cocaine and esctasy was something to do. In her 2010 tell-all book unSweetined, she disclosed she snorted meth at the premiere of an Olsen twins movie in 2004. “I was pulling off the deceit,” she wrote (via Us Weekly). “It was hard for people to believe I was doing that much drugs. I look at photos from that event, and I didn’t even look strung out!” Sadly her love life has been a mess as well. Jodie is still in her 30s and has been in out of 3 broken marriages.

Every Character in Fuller House is a Celebrity

In Tanner House, everyone is super famous, which raises eyebrows. It’s an unreal household where Jesse is a massively successful musician-cum-composer for General Hospital. Danny and Rebecca secured a gig on national TV beyond Wake-Up San Francisco. Steph was a famous DJ, and Kimmy’s hubby is a renowned race car driver. Joey is a famous comedian who was offered to feature on a Vegas-based stand-up comedy show. It’s like the Tanner House members got hold of a Jeanie and got their wish to be famous and successful granted.

Reddit fans are convinced that Uncle Joey is the real biological father of the Tanner girls. Notice how DJ, Stephanie and Michelle are all blondes just like Uncle Joey meanwhile their “real” dad, Danny Tanner is a dark brunette? Hmm… another conspiracy theory is that Danny and Jesse are lovers and that Danny married Pam (Jesse’s sister) so that he can come off as a straight American man to protect his broadcasting career.

Two Generations Living in the Attic

Jesse and Rebecca (Aunt Becky) used to live in the attic after getting married, which we found quite strange. However, now they are raising their twins in the Tanner House’s cramped rafters, which is weird. Though Kimmy choosing to live in the attic isn’t that strange given that it’s Kimmy after all. But the entire scenario is a bit too unrealistic. Real estate in San Francisco might be too expensive, but one can definitely afford a small apartment… no?

So much for all virtuous Aunt Becky actress Lori Laughlin. Apparently Lori Laughlin was not at all squeaky clean when she got indicted in 2019 for paying half a million to Rick Singer (the ring master of what the FBI dubbed ‘Varsity Blue’ scandal) to cheat her daughters into getting admissions to the University of Southern California. She denied her involvement but but 2021, in the middle of the Wuhan Covid pandemic, Lori admitted her guilt and was sentenced to 2 months in prison. She got off easy.

DJ is a Mirror Image of her Dad

We all know that Danny Tanner raised his three daughters as a single dad after being widowed. Now we have DJ Tanner, who is raising her three boys after getting widowed recently. And on top of it, she’s raising her sons in that very home where she was raised. We understand that the producers are trying to create some nostalgia here, and the whole theme of the show is to bring back old vibes. But, at least the writers could have come up with a better storyline for DJ. Why they resorted to the same story and situation as that of her father’s?

Candance Cameron Bure has gotten into hot waters for her conservative views. Yet for being so conservative, her outwardly display of her sexual relationship with her husband with an Instagram photo “shock” the media… crazy! She’s a good wife and the media is up in arms.