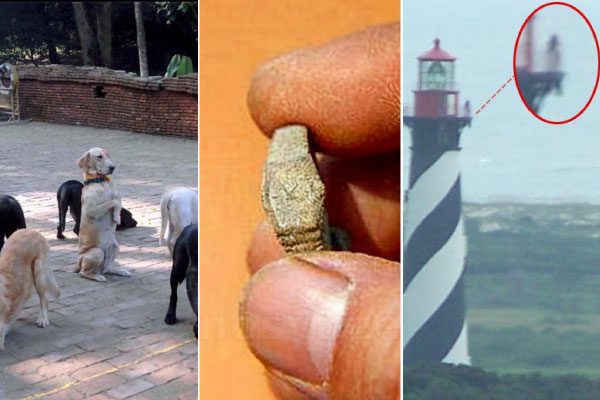 Cameras have been in the run for decades. People have used them to capture all sorts of memories. But, sometimes, the camera lens can capture unimaginable things that no one has answers to. Science has worked hard on exposing fables, but its efforts have come to naught when it comes to these photos.  These pictures have been speculated upon for years to no avail. What is the story behind them? What secrets do these pictures hold? The world is still trying to find out.

The man at the podium is Robert A. Ferguson who on November 16, 1968 this photo was taken in Los Angeles, California at a Spiritualist conventions. What’s so unusual was there appears to have a faint person peering over Robert’s right shoulder.

Family members recognized that the mysterious person was Walter, Robert’s brother who died in 1944 in World War II. Since this photo is a Polaroid, it is not possible to have a botched negative film development process. So is it possible that the paranormal really do exist?

Sighting of The SS Watertown

Most haunted things are the object itself. In this case, the ship is not the vessel that is being haunted but rather it is the sighting of the two crewmen’s faces that had recently died spotted in the sea by the same crew. On that fateful night of December 4, 1924, James Courtney and Michael Meehan was cleaning out the cargo deck when they were accidentally killed with poison gas and died on board. They were given the proper sea burial and tossed the bodies overboard.

While the SS Watertown was heading back to the shores soon after the sea burials, several crew members kept spotting the two faces of their former dead mates. The sightings were so frequent that one of the crew members snapped a photo and handed over to the Captain to be put away in a safe place. Once the SS Watertown had landed on shore and a new crew was on board, there were no further sightings of the two men.